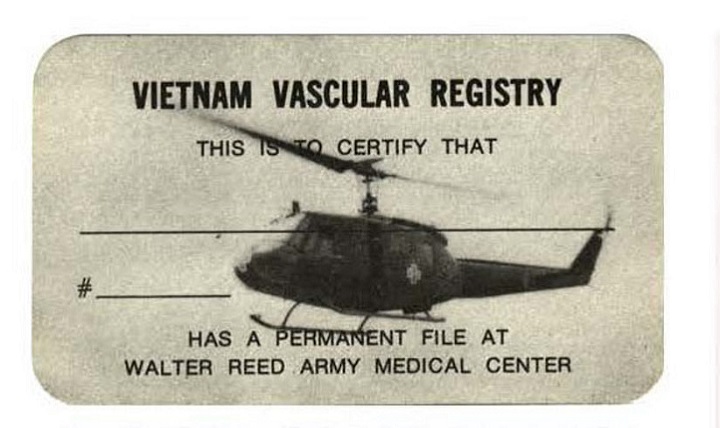 The Vietnam Vascular Registry, developed by Dr. Norman Rich at Walter Reed General Hospital, documented and analyzed blood vessel injuries in Vietnam. Each patient entered into the registry was assigned a consecutive number and given a vascular registry card, such as this one. (Courtesy photo by Dr. Norm Rich)

Military Medical HistoryBETHESDA, Md. — Five decades after being shot in Vietnam and almost losing his leg, former Army Spc. John Fogle will make good on a promise he made to the surgeons at the 22nd Surgical Hospital in Vietnam who saved his life.

Before he was transported to a general hospital in Japan, Fogle told his surgeons he would drop them a line and let them know how he was doing. He never did write, but instead, in May he will fulfill his promise of reconnecting – in person.

Fogle was injured in combat on July 25, 1969. Although over time he forgot their names, he never forgot the doctors who saved him and when he learned of a reunion planned for the surviving members of the 22nd Surgical Hospital staff, Fogle decided to seek them out in hopes of inviting them to the event.

One of his first stops in his search was the Vietnam Vascular Registry, developed by Dr. Norman Rich, chair emeritus of the surgery department at the Uniformed Services University of the Health Sciences. 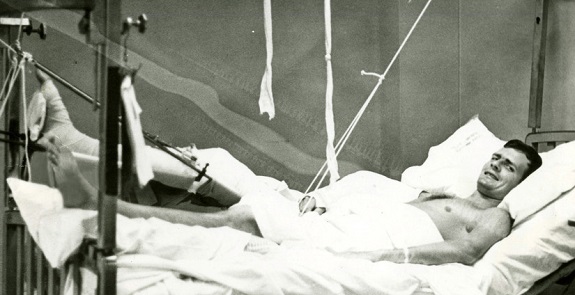 Army Spc. John Fogle recovers at the 249th General Hospital at Camp Drake, Japan, in 1969 from wounds he received in Vietnam. Thanks to the Vietnam Vascular Registry, developed by Dr. Norm Rich of the Uniformed Services University of the Health Sciences, Fogle was recently able to track down the name of the doctors who helped save his life. (Courtesy photo by John Fogle)

The 22nd Surgical Hospital in Vietnam, marked with red cross, where Army Spc. John Fogle was first treated in 1969 after being shot three times by enemy fire, nearly losing his leg. The pavement area was used as the helicopter landing pad. (Courtesy photo by Terry Caskey)

In 1966, the Vietnam Vascular Registry was developed by Rich at the Walter Reed General Hospital based on cases he had seen while serving in Vietnam along with hundreds of other cases added by colleagues. The registry documented and analyzed blood vessel injuries in Vietnam, resulting in documentation of more than 10,000 injuries from about 7,500 American casualties in Southeast Asia. Each patient entered into the registry was assigned a consecutive number and given a vascular registry card stating the registry’s purpose.

Rich has maintained the registry for more than 50 years. If stretched out completely, the entire registry itself would be about 114 linear feet, he noted. In 2016, the registry was digitized by the Office of the Secretary of Defense, making it much easier to search and find records from vascular patients seen during Vietnam. The originals were sent to the National Archives and Records Center in St. Louis.

Fogle had held onto his registry card, sent by Rich from the Vietnam Vascular Registry, for more than 50 years. Once he connected with Rich, he was able to reference his assigned registry card number, making it relatively easy for Rich to access his medical records from the 22nd Surgical Hospital. The records provided the names of Fogle’s doctors, among them Dr. Monroe Levine, who assisted in the surgery on his right leg and arm.

Fogle has foggy memories of the day he was injured, so over the years it was hard for him to remember the names of those doctors who first operated on him in the 22nd Surgical Hospital. However, he will never forget being shot while flying in an observation helicopter.

He was on the lookout for signs of enemy activity, as the crew chief, and as they flew over a canyon, they surprised the Viet Cong, who began firing at their helicopter. Fogle was shot three times down his right side, leaving him with a severed femoral artery and a compound fracture in his femur. He remained conscious, though, and continued firing back to suppress the enemy’s fire and protect his crew, which included the pilot, who sat just two feet away. They were able to get out of there quickly and landed safely, arriving at the 22nd Surgical Hospital which was only 12 miles away. Fogle’s actions later earned him an Air Medal.

About 10 minutes after he had been shot, Fogle was being pulled into the 22nd Surgical Hospital, which he recalls had four fully equipped operating rooms, totally air conditioned. The unit’s mission was to help stabilize the wounded before transporting them to the 249th General Hospital at Camp Drake in Japan.

“They performed miracles in there,” Fogle said. At the time, he said, his leg was a big “question mark.” Surgeons in that unit prepared him for transport to Japan, and told him he “wasn’t out of the woods just yet.” He made it to the general hospital, where he underwent more surgeries. His recovery, over the years, was smooth and he has not had any other major issues.

“I was very fortunate,” Fogle added. “I could’ve easily lost my leg.”

He added that many surgeries were performed at the 22nd Surgical Hospital, over a long period of time, so it would have been hard for the doctors to remember each patient. In looking through his records obtained through the registry, Fogle said he learned that Levine had seen four other patients that same day.

“That’s why these notes [in my records] are so important,” he said.

After learning Levine’s full name, it didn’t take long for Fogle to find that the doctor is still practicing medicine in Colorado. The two connected over the phone, and are now looking forward to meeting again, after all these years, at the reunion, which will take place in Florida. Fogle sent his records to Levine to look through, hoping to help jog his memory before they meet in May.

Fogle considers himself very lucky. After leaving the military, he’s really only had to limit himself to certain sports and activities because he did suffer muscle loss, which throws off his balance to this day. He was able to go back to school after his military service and became an electrical engineer. A few years ago, he retired after a fulfilling, 38-year career.

Had it not been for the work of Levine, as well as the others in that unit and throughout his care and recovery, Fogle might not be where he is today.

Rich was pleased to hear Fogle reconnected with one of the surgeons who saved his leg.

“This is what makes it valuable,” he said, referring to the extensive Vietnam Vascular Registry. “It is really reassuring that what we were doing has merit.”

About the Author: MikeD